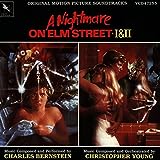 A Nightmare on Elm Street Soundtrack

A Nightmare on Elm Street featured the following songs:

A Nightmare on Elm Street featured the following pieces of instrumental music:

The soundtrack by Charles Bernstein, is competent and highly experimental.

It doesn't really inspire any sense of dread or fear, as opposed to the soundtrack for "Halloween", for example. Granted, it does promote a resemblance of a lullaby but it's nothing special.

The score for Nightmare 1 was released in Germany on Varese Sarabande (STV 81236) in 1989. It´s extremely hard to find and generally costs a LOT. [Thanks to Alex Bergdahl]

The score has since been re-released on CD with the music from the sequel.Update Us

Jump To: The Juicy Trivia!
Or use the menu to navigate
1984 New Line Cinema
1999-2020 fast-rewind.com
V4_27 Powered by Rewind C21 CMS
Please Share The 8s
Support this spam free and non-commercial site
Copy
Thank you for sharing us!