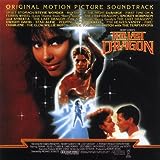 This soundtrack used to be "disgustingly" rare with used copies fetching over $100!!

Several Key tracks are extended from the LP versions to include a bit of instrumental score --although I can confirm this is the same as the 'disgustingly rare' original CD release from the 80s (Cat #: ZD72363) as this author has both versions...

You can now buy it through our "buying guide" page for less than $5 !!!Update Us

Rewind Archive
Last Dragon's Richard Perry-produced title theme was nominated for Worst "Original" Song at the 1985 Golden Raspberry Awards, as was Vanity's song "7th Heaven".
Thanks to Nick
The song "Rhythm Of The Night" by DeBarge was the created especially for the movie and features prominently.
Rewind Archive
Featured DeBarge song "Rhythm of the Night", written by Diane Warren, reached #3 on the Billboard Hot 100 and #1 on the Billboard R&B charts.

The Last Dragon featured the following pieces of instrumental music:

Rewind Archive
The instrumental music was written and conducted by Misha Segal, an Emmy® award-winning composer and accomplished recording artist, songwriter and producer. He was well known to Motown and Berry Gordy, having worked with many of their top artists.

Jump To: The Juicy Trivia!
Or use the menu to navigate
1985 TriStar Pictures
1999-2020 fast-rewind.com
V4_27 Powered by Rewind C21 CMS
Please Share The 8s
Support this spam free and non-commercial site
Copy
Thank you for sharing us!