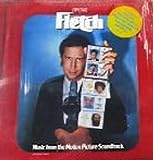 
Bit By Bit
Stephanie Mills
Fletch, Get Outta Town
Dan Hartman
Running For Love
John Farnham
Name Of The Game
Dan Hartman
A Letter To Both Sides
The Fixx
Is It Over
Kim Wilde
Add Missing Song

A few quick definitions: There are traditional orchestral scores whereby the drama is conveyed by an orchestra (Strings, Woodwind, Brass, Percussion). There are pop soundtracks, which are a collection of pop 'songs' from different artists. And then there are pop scores, a collection of instrumental music composed and recorded with contemporary instrumentation such as guitars and synthesisers. This film was lucky enough to have a a pop score from Harold Faltermeyer.

Much like Faltermeyer's score to Beverly Hills Cop, the synth hooks seem to embellish the progress of the detective story. His uncanny choice of sounds and terrific melodies make Fletch a complete joy.

There were however several pop songs used in the film which were collated on a vinyl/cassette album at the time of the film's release and re-released in 2018 on CD by Varese. The actual full 'pop score' remains somewhere in Harold Faltermeyer's vault...

...I have friends who are less valuable than this collection of music. ;-)Update Us

Jump To: The Juicy Trivia!
Or use the menu to navigate
1985 Universal Studios
1999-2020 fast-rewind.com
V4_27 Powered by Rewind C21 CMS
Please Share The 8s
Support this spam free and non-commercial site
Copy
Thank you for sharing us!