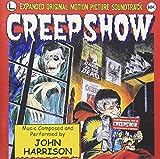 
So Far So Good
Sheena Easton
(She's The) Shape Of Things To Come
John Oates
Natural Love
Sheena Easton
Words Into Action
Jermaine Jackson
Step By Step
J.D. Souther
Living Inside My Heart
Bob Seger
Trials Of The Heart
Nancy Shanks
'Til You Love Somebody
Michael Henderson
If We Can Get Through The Night
Paul Davis
True Love
The Del Lords
If Anybody Had A Heart
John Waite
Add Missing Song

The excellent 80's 'pop' soundtrack was produced on CD in the early 90's and although sometimes hard to find, our search facility can find it new for you for as little as $10.Update Us

Rewind Archive
There was a music video made for Sheena Easton's "So Far, So Good". In it, she sang the song while essaying the role of an ad agency worker coming up with a campaign for the movie. Footage from the movie was featured throughout the video. If you're a VH1 Classic freak, you may catch this video on there.

Soundtrack score was by Michelle Dibucci and John Harrison. John very much stayed in the genre in later years not only composing but also directing epsiodes from the TV series "Tales from the Darkside" and then following up with the movie of the same. More recently he directed "Dune" the mini TV Series in 2000.Update Us

Thanks to E
Many musical parts from Creepshow were re-used for the "Thanksgiving" trailer in Grindhouse.

Jump To: The Juicy Trivia!
Or use the menu to select another option
1982 Warner Bros
1999-2018 fast-rewind.com
V4.0b Powered by Rewind C21 CMS
Please Share The 80s Lve!
Support this spam free and non-commercial site
Copy
Thank you for sharing us!