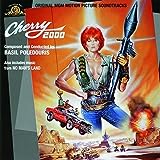 Cherry 2000's wonderful score by Basil Poledouris was previously only released as the rare and valuable first ever Varèse CD Club in 1989 and had, until recently, been scarily rare ever since. There were only a couple of hundred legitimate copies of this in existence and legend has one buyer paying $2,500 for a copy in 1997!

Recently though, this engaging hybrid synth and orchestral score was re-released but is now going out of print again. Use our products feature to get a copy while you still can...Update Us

Jump To: The Juicy Trivia!
Or use the menu to navigate
1987 Orion Pictures Corporation
1999-2020 fast-rewind.com
V4_27 Powered by Rewind C21 CMS
Please Share The 8s
Support this spam free and non-commercial site
Copy
Thank you for sharing us!