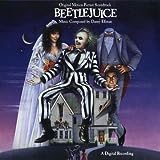 This soundtrack is truly original and unforgettable. Leave it to the incredible Tim Burton to put together one of the most un-80's soundtracks ever in the 80's which is still so easily recognizable today.

Who can ever forget the oh-so-kewl belefonte reggae tunes? Burton has a knack for merging completely different styles (Beetlejuice and Belefonte, Batman and Prince) into one amazing project.Update Us

Thanks to Ian
Beetlejuice marked the third time Danny Elfman has worked with Tim Burton, following "Pee-Wee's Big Adventure" and and episode of the 80's revival of "Alfred Hitchcock Presents", the two have gone on to work a total of 12 times (Only two of Burton's movies were not scored by Elfman, "Ed Wood" and "Sweeney Todd")

Danny Elfman was the leader and lead singer of the band Oingo Boingo, best known for the theme song to the John Hughes comedy "Weird Science" and for their appearance in "Back to School" performing the title track of their album Dead Man's Party; he also provided the singing voice for Jack Skellington in Burton's stop-motion classic The Nightmare Before Christmas

Jump To: The Juicy Trivia!
Or use the menu to navigate
1988 Warner Bros.
1999-2020 fast-rewind.com
V4_27 Powered by Rewind C21 CMS
Please Share The 8s
Support this spam free and non-commercial site
Copy
Thank you for sharing us!