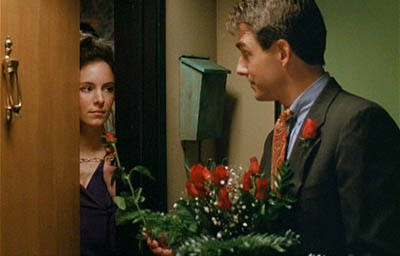 These scenes were actually shot at The Ben Rose Auto Museum, located in Highland Park, Illinois. Google Map
Ferris's house was pretty much the only location not shot in the Chicago area. It's actually located in north Long Beach in a housing community called Virginia Country Club on 4160 Country Club Drive in Long Beach, CA. When Ferris is running to beat Jeannie home, there's a trash bin with Palm Trees on it. It drove the director nuts! [Thanks to Maria]

Cameron's garage/house scenes were at an actual residence in Highland Park, IL. I've seen it. [Thanks to Ruthanne]

The Gummie Bear Bus Scene was filmed right down the street from the house At Los Cerritos Park. The fire hydrant (the reason why Ed Rooneys car was towed) was actally a movie prop. The intercom system on the house was also a movie prop. The scene where Jeanie stops and sees the giant water tower was filmed right around the corner from the house, but there is no water tower around. That scene was filmed in 2 seperate locations. [Thanks to Peter B]

Ferris, Cameron & Sloan park the Ferrari in a parking garage at Madison & Wells, Chicago. [Thanks to Tom G]

The Beach scene, where they are lying on top of the Stone Wall overlooking the lake, was shot at the Glencoe Beach. East end of Park Ave. in Glencoe, IL [Thanks to Phil Gross]

The restaurant exterior was on Schiller, 22 W. like the door says, between State & Dearborn. It is no longer there. [Thanks to Tom G]

Glenbrook North High School, 2300 Shermer Road, Northbrook, IL stood in for Shermer High School. The interiors were shot in the former Maine North High School (same as The Breakfast Club). This is the same highschool that John Hughes attended. I went to the school and looked him up in the yearbook. [Thanks to Mandy]

The school, Glenbrook North, is now infamous for the high school hazings of 2002. It is in the same area that a lot of "Weird Science" was filmed. [Thanks to Barry Oglesby]

Mr. Rooney and Sloan are waiting in the front of the school for Sloan's "dad" (aka. Ferris). They are actually standing outside the seldom-used entrance to the school's auditorium - one that is locked during school hours and at the rear of the school, away from any classrooms. That tidbit has always embroiled any Glenbrook North H.S. alum. Glenbrook North is also the school famous for the Powder Puff hazing incident involving senior and junior girls. [Thanks to Tina]

But two correspondents think otherwise:
Rooney's office was filmed at El Camino High School in Woodland Hills, CA. I was going there at the time and I remembered that they painted and carpeted one of the offices for the shoot (the vice-principal's, if I remember correctly) and left it that way afterward. It was the only office in the school that actually looked nice. [Thanks to Paul]

Whatever the verdict on Rooney's office, the Maine North High School building does, in fact, still exist. It is an Illinois State Police precinct. [Thanks to Chris]

Some of the interior shots of the school were done at El Camino Real High School in Woodland Hills, CA. (5440 Valley Circle Blvd., Woodland Hills, CA 91367). The principal's office and the secretary desk area are very much part of our school. The connection to the movie is a source of pride to our school. [Thanks to KRitchie]

Blue "Save Ferris" watertower, off of Cedar Road next to the Northbrook Public Library, Northbrook, IL. The orange sculpture Cameron and Sloan walk by is located near the corner of Dearborn and Adams in Chicago, IL.

The water tower is in John Hughes' home town from childhood. Apparently it took years before it finally wore off. [Thanks to Apollonia]

They also shot at Wrigley Field, The Sears Tower, The Chicago Mercantile Exchange, and The Art Institute of Chicago. [Thanks to Bob Angarola]

I believe the steps people were dancing on during the 'Twist And Shout' parade are the steps leading down to the fountain at Bank One Plaza between Clark and Dearborn. [Thanks to John Kempf]

A lot of scenes were filmed in Winnetka, IL. Multiple shots of when Ferris is trying to beat Jeannie home were filmed in an area between Willow Rd and Oak, east of Hibbard. I remember seeing it filmed when I was growing up and some of the yards of my friends were used in the movie. Scenes downtown Winnetka featured Jean Wright Realty the Indian Trail Restaurant exterior, although the restaurant no longer exists. [Thanks to Alex Perry]

At the end of the movie there are the chase scenes. By analyzing the movie and using Google Maps/Streetview I found several memorable locations:

All the locations are in the Winnetka, IL area. Start at 457, Berkeley Avenue: Here Ferris jumps in front of the car driven by Jeanie. They briefly make eye contact. Mom is in the passenger seat. Ferris runs away through the bushes. The house in the background is very distinct. The car continues to drive and takes a right off Berkeley Avenue and onto Cherry St. Next, the intersection between Cherry St. and Glendale Ave: At this intersection, another scene takes place. Here Tom Bueller stops at the intersection and reaches into the glove compartment to get a TicTac. While he does this, his wife and daughter drive by with a police car in pursuit. Intersection between Ash St. and Hibbard Road: The car with Jeanie and Mom turns corner onto Hibbard Road chased by the Police. [Thanks to SP]

The scene where the dad is driving behind the grandmother was shot on Prince Street in Northbrook, IL [Thanks to Anonymous]

We are pleased to be able to bring you a sneak peek at what LX locations will be available for Ferris Bueller's Day Off upon release:

Please Note: The status of some entries in this preview may be wrong because they are in-progress or need updating before release.
Jump To: Bungles & Goofs
Or use the menu to navigate
1986 Paramount Pictures
1999-2020 fast-rewind.com
V4_27 Powered by Rewind C21 CMS
Please Share The 8s
Support this spam free and non-commercial site
Copy
Thank you for sharing us!