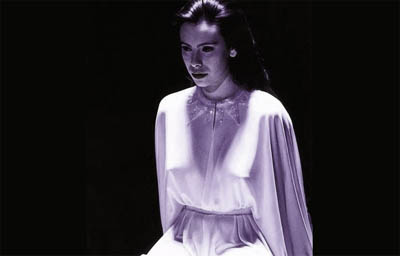 The gorgeous Mathilda May stars as an alien vampire

Rewind Archive
This film has a lot of famous connections to it, it was directed by Tobe Hooper who previously directed "Poltergeist", was co-written by Dan O'Bannon who was the co-writer of "Alien" and had special effects by John Dykstra who had previously won an Oscar for his work on "Star Wars" and was the special effects supervisor on the recent "Spider-Man" film.

I was 'lucky'. I got shown classic 80s films like "Sexmission", "Bad Taste" and "Lifeforce" [grin]. A word of warning --this review is like one big spoiler. If you want to watch a classic british sci-fi horror without knowing the plot then go watch the DVD before reading past the following short version.

The short short short version: 3 vampiristic aliens who look like humans come to earth to drain the lifeforce (the soul) out of everyone, but a NASA astronaut knows their secret and is determined to stop them.

The long long long version: In a time where it still seemed possible that the British would contribute to space exploration, they have launched a space shuttle patriotically called 'Churchill'. During a mission to investigate Halley's Comet, a group of Churchill's astronauts discover a dormant alien space craft 150 miles long. While three of the astronauts are venturing inside the alien craft, the end of it opens up like a giant umbrella. Inside they find large dead bat-like creatures surrounding a chamber where they discover three perfectly preserved human bodies inside glass-like cases, two guys and a girl, and no clothes in sight.

Back on earth they lose contact with the shuttle so send up another one to investigate, they find the first shuttle drifting in orbit, burnt out with no survivors and the perfectly preserved three humans in their glass-like cases without a scratch, which they bring back to earth.

Naturally, when they get the alien bodies back they decide to examine the girl first, one of the guards outside of the examination room is drawn to the alien girl so stupidly goes in to take a closer look, as soon as he reaches down to lift up the sheet covering her to get a good look she opens her eyes and sits up, the guard is almost rigid with fear but the girl wastes no time in seducing him ("use my body"), kissing him and thereby sucking the lifeforce out of him, turning him into a shrivelled up corpse. Then after sucking some more energy from another person she calmy walks out of the building (still butt naked) and disposing of another guard who gets in her way.

Colonel Caine of the Special Air Service (SAS) walks in on the scene with an "don't mess with me, I'm in charge!" air about him and continues to behave this way throughout the film, unphased by the utterly weird goings on.

After the other two aliens wake up and then get shot to bits the doctors start an autopsy on the first guard who got his lifeforce sucked from him, but before they could make the first cut the zombie looking man 'wakes up' and sucks the lifeforce from a doctor, restoring him back to normal human form - we learn that the girl has started a vampiristic plague...

Unanswered questions about what happened on the Churchill (first shuttle) get answered when an escape capsule crashes back to earth in Texas containing Colonel Tom Carlsen, brought to the base in England he tells Caine and the others how the crew died one by one, shrivelled up like their lifeforce had been drained from them, so he decided to destroy the spacecraft to stop the aliens getting to earth.

NASA discover an 'unusual object' leaving the tail of Halley's Comet and heading towards Earth, Carlsen whilst taking a rest up as the space girl appears to him [cue more of that unnecessary nudity] then suddenly he wakes from his nightmare and screams out, Caine and Professor Fallada burst in and whilst talking realise that Carlsen is in some sort of psychic contact with the space girl so the doctor hypnotises him to find out where she is. This eventually leads them to searching for her at an asylum as she jumped into the body of another woman who works at the asylum. They go there looking for her and find she jumped into yet another body, that of Patric Stewart (Captain Picard of the 80s sci-fi series Star Trek:The Next Generation) who they drug to talk to the girl who's in his mind.

Whilst flying back to base Professor Fallada calls and tells Caine & Carlsen that the two males didn't die but jumped to other bodies and he managed to kill one of them using leaded metal shaft through the solar plexus. They're ordered to go to the citadel at Whitehall, but before then Caine demands Carlsen tell him what really happened on the Churchill... Carlsen proceeds to tell Caine that the space girl killed all the crew except him as he'd opened the glass-like case and whilst kissing her part of their lifeforms had transferred to each other. Caine says "she's not human she's an alien, she'll destroy you", Carlsen replies "She's destroyed worlds..."

Upon getting to Whitehall they discover most of the people there have been turned into lifeforce sucking zombies so escape back to Blackheath, during the journey they hear that the whole of London has been put in quarrantine because of the plague. At Blackheath they're held back at gunpoint as they themselves are put in quarrantine for two hours (the incubation time of the plague), after which they discover the alien craft has parked itself in a geo-stationary orbit over London and that if the army can't contain the plague, sterilisation by thermo-nuclear device has been approved.

Pondering for a moment what to do next, Caine & Carlsen go outside to take a look at the devastation of London and see a sparkling bright blue light shining directly up into the sky, Carlsen says all those little blue lights are souls that are being collected and sent back to the ship. Caine tells the army that if they can kill the two remaining aliens then there won't be any need to destroy London, Carlsen escapes into London to find the girl and Caine follows into what appears to be hell on earth, zombies everywhere, buildings on fire and general mayhem...

Although not highly regarded, I love the film. It bears little resemblance to the novel on which it is purportedly based, "The Space Vampires" by Colin Wilson. It owes far more to the BBC's fifties' "Quatermass" trilogy of serials and especially to the Hammer reworking of the last of them, "Quatermass and the Pit", in its zombie stalking London sequences.

What more could you ask for in an 80s sci-fi horror flick?

Some may consider it b-movie material.

Jump To: Music & Soundtrack Vibes
Or use the menu to navigate
1985 Cannon Films
1999-2020 fast-rewind.com
V4_27 Powered by Rewind C21 CMS
Please Share The 8s
Support this spam free and non-commercial site
Copy
Thank you for sharing us!