My Best Friend is a Vampire 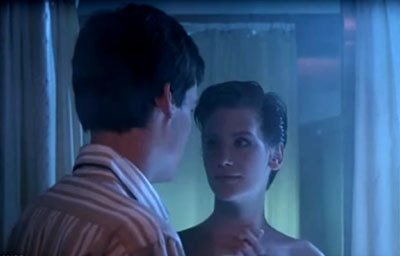 This movie is one of the quintessential 80's vampire flicks.

It contains just enough cheese, action, romance and teen angst to fit in with any other teen movie made in the 80's. I was 15 when this movie came out and it instantly became one of my all time favorite movies. Like "Once Bitten" with Jim Carrey it does not seem to take itself too seriously.

It shares its coming of age theme with so many great 80's movies, but uniquely mixes it with a special ingredient... vampires.

Jeremy (Robert Sean Leonard) meets & spends the night with a very attractive girl, who turns out to be a vampire. Despite his incredulity he finds himself turning into a vampire, but figures it's no big deal -despite the help of a veteran vampire mentor called Madoc (Rene Auberjonois) and a handbook entitled "Vampirism - A Guide To An Alternative Lifestyle" he just wants to ignore the advice and continue to have a normal life.

As the transition continues, his need for blood is satisfied by pig's blood, but ultimately he must choose the path he is going to take once he fully transforms.

This movie is just plain fun.

There is a fight scene, teen angst, and a little romance. It is NOT the all dark and broody vampire horror flick.

It uses the vampire change as a metaphor for growing up. I put it up with "Once Bitten" and "One Crazy Summer" and "Vampire in Brooklyn".

It does have the eighties cheese factor built right in.

Jump To: Music & Soundtrack Vibes
Or use the menu to navigate
1988 Kings Studio
1999-2020 fast-rewind.com
V4_27 Powered by Rewind C21 CMS
Please Share The 8s
Support this spam free and non-commercial site
Copy
Thank you for sharing us!