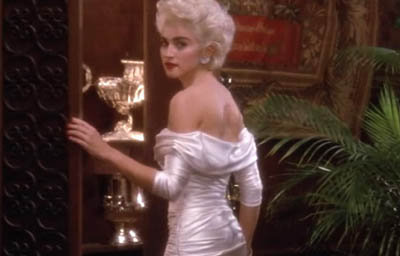 Who's that bleach blonde who knows how to use a pistol?

Who's that woman who always seems to be in trouble? Who's that shoplifting diva who commits crimes with an innocent heart? Who's that lady that has everyone asking...

"That girl" is Nikki Finn (Madonna).

It depicts Nikki as a platinum blonde, black mini-skirt wearing cutie who is so beautifully disarming she causes horrendous car accidents and whistling construction workers to swoon as she passes by. The cartoon is unmistakably Madonna as you see her dance to the hit song "Causing A Commotion" and mouthing the classic Madonna phrase "Get into the groove". In the cartoon, the main plot of the film is played out to the viewer.

Nikki's boyfriend Johnny catches some henchmen stealing money out of a trust fund and takes pictures of them in the act. Johnny puts the pictures in a safety deposit box and gives Nikki the key for safekeeping. The henchmen catch Johnny, chop him into a million pieces and then frame Nikki by putting his body into the trunk of her car...

He's getting married to the daughter of one of the richest men in New York, Mr. Worthington and it seems he has a million chores to do that day. His bride-to-be is Wendy Worthington (Haviland Morris), a flaky woman who's consumed in her wedding plans and is an intimate friend of many New York cab drivers (if you know what I mean ).

Mr. Worthington has Louden running all over town. First to pick up a mountain lion for an exotic animal activist named Montgomery Bell (Sir John Mills); then to jail for a so-called business endeavor called "Operation Prisoner Shuttle". Louden needs to pick Nikki up and make sure she catches the next train to her hometown of Philadelphia.

Nikki, meanwhile, is more than ready to leave jail. She's spent the last for years in a jail cell she's painted pink and decorated with pictures of Elvis and Marlon Brando. Perhaps one of the most famous scenes in the film is when she puts on her fire engine red lipstick in front of a doublesided mirror and blows kisses to two cops watching her from behind the mirror.

Nikki meets Louden and basically gives him the runaround. She insists on driving the Rolls Royce, which belongs to Mrs. Worthington and naming the mountain lion Murray. Nikki then insists on going to the mall because she claims her mom just thinks she's been shopping... for the last 4 years!

Nikki boosts some clothes and cassette tapes, but swears she's not a murderess. She explains her story to Louden and he seems to believe her. He agrees to help her clear her name and helps her get the bank and the box number from the scanky henchmen who fall out of a second story garage in the Rolls.

Nikki and Louden continue to become closer in the quest to clear her name and fall in love in a beautiful scene where they give Murray to his rightful owner Mr. Bell. Mr. Bell has created a Brazilian rainforest filled with animals on top of his roof and it's there that Nikki and Louden's love blossoms.

Nikki, broken hearted, realizes she has to go back to Philly and now that she has opened the security box she's ready to go home. However, on the bus she opens the envelope and finds out that Mr.Worthington is an embezzler and that he's been behind it all the time.

Nikki crashes the wedding, gets Mr. Worthington arrested and proclaims her love for Louden. They ride off into the sunset on a bus to Philly, with Murray and all. Justice prevails and Madonna shines through as usual.
Author: Bridgette MarieUpdate This Review

This movie was really put down by a lot of critics, but I don't understand why.

It's one of Madonna's best and I love all the elements it's comprised of (it's style, the cartoon, the mountain lion, etc.)

It's definitely not for cynics, but I don't understand why you wouldn't like it as it's a really innocent, cute movie.

Jump To: Music & Soundtrack Vibes
Or use the menu to navigate
1987 Warner Bros.
1999-2020 fast-rewind.com
V4_27 Powered by Rewind C21 CMS
Please Share The 8s
Support this spam free and non-commercial site
Copy
Thank you for sharing us!