The Sword and the Sorcerer

R
AKA:
1982
“
In a medieval world of kings and soldiers, the sorcerer is the most powerful of all 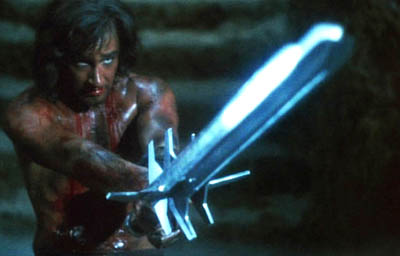 Thanks to Matt Chadwick
Despite grossing only $40 million at the box office, "The Sword and the Sorcerer" was actually the most profitable independant film of it's year. $40 million may not seem like too much money today, but when it is taken into consideration that the film cost less than $2 million to produce, you have a profit of at least $38 million. As director Albert Pyun once said, the only reason that a sequel was never made is that the producer's made enough money out of the film to never have to work again, so production company Group One films closed their doors forever.

More Trivia from The Sword and the Sorcerer
Cast/Crew Albert Pyun
Hi,

This Albert Pyun and yes, I have shot and am now editing "Tales of an Ancient Empire". Lee Horsley joined the bawdy fun as well. I think it will be the perfect bookend to my career as it will be my 50th film.

I tried to keep the 80's feel and irreverent fun of the original with a stronger emotional core. Hope everyone gets a kick out of it. Should be out early next year.

More Trivia from The Sword and the Sorcerer

One of several 80's fantasy films that were produced during the peak of the Dungeons & Dragons craze, The Sword and the Sorcerer had been billed as a major motion picture upon its release. Its success at the box office, however, was marginal and it was ultimately forced into the shadow of much higher profile fantasy films, such as Conan the Barbarian. But it certainly didn't stop me from enjoying this movie any less as a kid.

The tale begins as the tyrannical King Cromwell lands ashore of Tomb Island, in search of someone who can help him in his ongoing struggle to capture the prosperous kingdom of Eh-Dan. King Richard, the ruler of Eh-Dan, has successfully thwarted Cromwell's every attempt at invading the kingdom, but the evil king isn't about to give up.

With the aid of a hired witch, Cromwell manages to raise the long-dead sorcerer Xusia from his slumber. Skilled in the arts of black magic, the undead sorcerer might be Cromwell's only hope of ever defeating King Richard.

After making a deal with the sorcerer, Cromwell launches an all-out attack on his rival's kingdom, easily laying waste to King Richard's soldiers with the aid of Xusia's powerful spells. With the battle all but won, Cromwell turns his attention to Xusia. Rather than taking the risk of the undead sorcerer betraying him, the evil king instead thrusts his dagger deep into Xusia's torso, before sending him over a cliff to his death.

Meanwhile, sensing the impending destruction of his kingdom, King Richard prepares to meet his rival in battle. Knowing that the encounter could very well mean his death, Richard entrusts his youngest son, Talon, with his legendary triple-bladed "Sly Sword", with the sole condition that Talon avenge his death should the worst befall him on the battlefield.

After a titanic struggle, Cromwell's forces eventually win out, with the murder of Talon's mother and father solidifying the victory. Realizing that the young whelp, Talon, has eluded his grasp, the king orders his soldiers to find him, but the sole surviving heir to the throne was nowhere to be found.

Eleven years later, a hulking young rogue would return to the place of his birth, to avenge the family he had lost so long ago.

But in a world of wicked kings and soldiers who rape and pillage, it is the sorcerer who is the most powerful of all.

I enjoyed this movie immensely as a kid. More than any other fantasy film ever created, it captured the spirit of high adventure, and the awesome revenge plot remains driven throughout the entire film.

It wasn't the greatest movie ever created, but in my view, it's one of the greatest underrated fantasy movies ever.

Great plot, awesome characters, and enchanting dialogue, with a little bit of humor thrown in for flavor.

Some might not be able to stomach as much cheese as this movie dishes out.

Jump To: Music & Soundtrack Vibes
Or use the menu to navigate
1982 Sorcerer Productions
1999-2020 fast-rewind.com
V4_27 Powered by Rewind C21 CMS
Please Share The 8s
Support this spam free and non-commercial site
Copy
Thank you for sharing us!