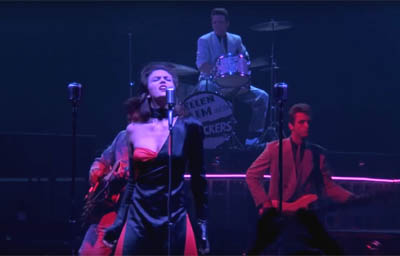 See Diane Lane, Bill Paxton before they were famous!

Thanks to Michael Manzano
Director Walter Hill intended "Streets of Fire" to be the first in a trilogy of action films starring Michael Paré as Tom Cody. Unfortunately, "Streets of Fire" did not come close to breaking even at the box office. What was expected to be Michael Paré's career breakthrough sadly demoted him to B-movie status, where he remains to this day.

More Trivia from Streets Of Fire

Kids of all ages are streaming into the local Theater for the return performance of Ellen Aim, the local girl who hit the big time with her band, The Attackers. The place is stomping and the first song in the set is huge. In the wings, Ellen's manager/boyfriend Billy Fish is cursing his decision to come back to this 'two-bit neighborhood'. And his fears are proved right. There's a surge from the rear of the hall and The Bombers, a biker gang of immense numbers, storm the stage and carry off Ellen. It seems that Raven, the leader of the Bombers, has taken a shine to Ellen and this is the ideal opportunity, as he says, to 'have you love me for a week or two'. The Bombers trash the hall and beat up anyone who tries to resist them, before riding off into the night.

Reva, the owner of a local coffee shop, is the only one who seems to know what to do - call for Tom Cody. Her brother Tom and Ellen were an item for years, until her career took her away. Reva figures he's the only one who would get her back, so he arrives back in town and almost immediately gets into a fight with some young punks who turn up after the excitement has ended looking for some action of their own. Tom gives them a good kicking and they run off, leaving their car behind. Tom 'appropriates' the car, and sets off for a drink. In the bar, he meets McCoy, an ex-soldier who ran out of wars. She's looking for a way to make some cash and a bed for the night. Tom provides both, when he agrees to go get Ellen back for Fish, in return for $10,000.

But getting her back isn't that easy, as they need to break into the Bomber's clubhouse, deep in The Battery, a dark, industrial complex full of mad bikers with guns. Cue many more explosions, much more great music, and some of the best one-liners ever quoted in a movie. Just as they are about to leave, Tom and Raven eyeball each other and they know that whilst it doesn't end here, it will end soon. Then Tom walks off, and their escape from The Battery is almost as eventful as their journey in, involving a meeting with the local police, a close-harmony group called The Sorels who were on route to a gig, and some kind of wierd 1980's neon scene where everyone is dressed in garish parodies of fifties clothing. Bizarre.

But eventually they get back, cue the only real poor bit of the movie. Now, we know that Ellen and Tom used to be "close - real close" so things come to a predictable head when Tom refuses the cash Fish was offering for the rescue and then Ellen decides to go after him, and.... well, you know.

Thankfully, this moment of predictable sloppiness is cut short when the Bombers reappear and the showdown begins. As the police chief says when his small force is faced down by around two hundred Bombers with guns: "Well Tom Cody, my plan went to s**t. Lets see how you do. Kick his a$$!".

When was this movie set? There's a good mix of fifties fashions with eighties neon colours, great music from the Sorels (sixties motown) and Ellen Aim (Jim Steinman seventies/eighties), classic cars from the fifties, and with a dark, post-apocalyptic feel to the Battery area which could suggest early twenty-first century?

Don't let this confuse you.

The performances in the movie are superb, from Michael Paré (Tom Cody) and Willem Defoe (Raven) in particular, but also from Diane Lane and Amy Madigan as Ellen Aim and McCoy. There are some great minor roles for established stars such as Rick Rossovich, Bill Paxton and Ed Begley Jr., but it's Rick Moranis that's the revelation. Surprisingly, he's actually good in this. And I can't say that about many of his movies - Little Shop Of Horrors and My Blue Heaven are really the only others I can stand to watch.

But this movie isn't about stars. It's about the music, the moment, the action, and the feel. Go to the IMDb and watch the trailer. or just go buy the DVD, through the links on this page. This movie is one of the rare ones where there is enough action and substance in the first five minutes to grip you, and ensure that you are still there at the end. I watched this movie again a while back with my pal Rupert, and he said "that movie is immediately placed at #4 in my all-time favorites list". And if you knew Rupert, you'd know that he would be very serious about that, believe me.

For the action, the humour, the music, the scenery and the fashions, this is a winner. And the fight scene at the end made me grip the seats. Those two guys going at each other with pick-axes!

Sit back and enjoy the experience that is Streets Of Fire, and never mind that it's obvious who will win in the end, have fun seeing how they get there!

Jump To: Music & Soundtrack Vibes
Or use the menu to navigate
1984 Universal Studios
1999-2020 fast-rewind.com
V4_27 Powered by Rewind C21 CMS
Please Share The 8s
Support this spam free and non-commercial site
Copy
Thank you for sharing us!