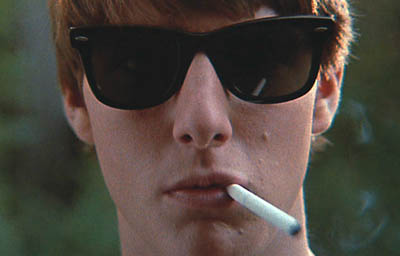 See Curtis Armstrong, Rebecca De Mornay before they were famous!

Thanks to Naomi
Allegedly, the chemistry between Tom Cruise and Rebecca DeMornay in the sex scene on the chair is real. The two actors met during filming and began dating almost immediately. In fact, the chemistry between the two was so intense and real that the director turned away because he was embarrassed.

Risky Business is a cult classic that seems to kinda sum up the mood of the decade "Anything is possible if you apply yourself..."

Cruise, starring in his first smash hit role after previously making a small splash with the military academy drama "Taps", plays the young Joel Goodsen who, after meeting a 'lady of the night' (played by DeMornay in her debut role), ends up becoming his own businessman in that area and incurring the wrath of 'Guido The Killer Pimp' (excellently played by Joe Pantoliano, who would later go on to star and co-star in many landmark 90's movies like "The Fugitive" and "The Matrix").

Joel (Cruise's character) is, at the start of the movie, your typical upscale teenager worried about his grades and committing minor 'fractures' of his parents trust by, for instance, taking out his father's Porsche when he had been expressly forbidden from doing so. As the movie goes on though, he is taken through a sequence of events that drag him ever deeper on a whirlwind ride into the underground 'business' of 'personal services' from which the viewer wonders if he will ever recover...

Saying much more about the plot would spoil the movie, but Risky Business was very well written and directed by Paul "True Crime" Brickman and was the surprise hit that first brought Tom Cruise to the masses. It also surely was one of the reasons that the Ray-Ban Wayfarer style sunglasses became such a mainstay of 80's wardrobe.

Nothing weak about Risky Business!

Jump To: Music & Soundtrack Vibes
Or use the menu to navigate
1983 Warner Bros.
1999-2020 fast-rewind.com
V4_27 Powered by Rewind C21 CMS
Please Share The 8s
Support this spam free and non-commercial site
Copy
Thank you for sharing us!