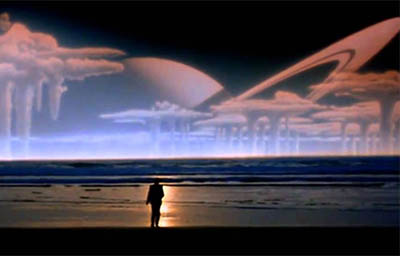 Zac Hobson wakes to discover he is the only person left on Earth after the global top-secret energy experiment he has been working on, Project Flashlight, has gone horrifically wrong and wiped out the whole of humanity, or so it seems.

He starts to live out his fantasies in his own exclusive kingdom, but he soon realizes the emptiness and loneliness of his nightmare situation and embarks on a frantic search for other survivors in the post-apocolyptic world.

His descent into madness is soon diverted as he realises he is not alone: He meets Joanne, a young woman, and Api, a Maori tribesman. They have all somehow survived the apocalypse because all three died at the same time: Zac attempted suicide, Joanne was electrocuted by her hair dryer and Api was killed at the hands of another man when the apocalypse occurred.

At least they are not left to go mad alone, but this only leads to jealousy, as the two men fight over the last woman alive.

In this respect, "The Quiet Earth" is, in many ways, a remake of "The World, the Flesh and The Devil" (1959), a movie that also features two male survivors fighting over one female.

The post-apocolyptic theme is a feature of the 70's and 80's, as a result of worrying about the seemingly imminent armageddon that the world was rushing toward.

Another excellent "last man alive" movie, this time from the 70's, is "The Omega Man" which features Charlton Heston accidentally surviving the holocaust and slowly going mad searching through the deserted world looking for someone else...

I saw The Quiet Earth a long, long time ago but it's true test of greatness is that I can still remember the initial impact.

The intruiging story deals has such great scope, but it remains simple, using only three main actors. If anyone can find this movie, I strongly recommend that you see it, just to see how you don't need huge explosions and special fx to create a dramatic sci-fi masterpiece.

Runs out of steam towards the end - great build up, odd ending.

Jump To: Music & Soundtrack Vibes
Or use the menu to navigate
1985 20th Century Fox
1999-2020 fast-rewind.com
V4_27 Powered by Rewind C21 CMS
Please Share The 8s
Support this spam free and non-commercial site
Copy
Thank you for sharing us!