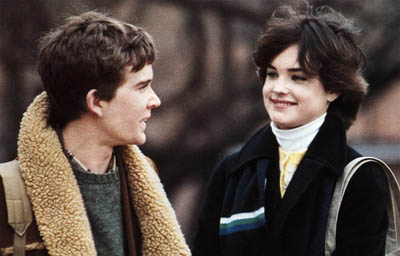 1980 was a cusp era, the drastic 'me decade' of the 70's was on it's way out and in came the 'greed-decade'. Dinner parties, wearing the right clothing, having the best appliances and NEVER appearing anything but content.

Ordinary People is a movie about appearances and feelings and does much more in the process.

Conrad Jarret is the definition of angst -way before angst became a way of life. A good looking teen boy who is forced to face harsh truths before he is ready.

You see, a year before the story takes place, he once had a brother, 10 months his senior -Buck. Buck was everything to everyone, including to Conrad, a hero, a do-no wrong, perfect student and athlete. Now he is gone, in flashback you see his untimely demise, during a sailing accident, bad weather and a storm abruptly changed a family. Buck drowned because he let go of the boat, Conrad lived because he hung on.

Guilt stricken by this fact, Conrad tried to end his own life, by cutting his wrists. He failed and the movie starts when he has returned from a hospital to begin living a life again.

I'll be honest. Some tragedy movies, it takes almost the whole movie for me to care about the main character. Ten minutes into this movie, I could honestly say, I was very glad Conrad Jarret failed in ending his life. A sweet boy, with a wonderful sense of humor, desperate eyes seeing all around him and the delicate way he handles his friends and family as they tip toe around him, afraid he'll hurt himself or someone else.

As part of the agreement with his father, he starts seeing Dr. Berger, a rather eclectic man with his own methods, but who you can tell right away is the key to Conrad finding his raw emotions. Conrad has healing to do, as do his parents, Calvin -a rags to riches lawyer with a heart of gold and Beth, his beautiful but terminally unhappy wife.

Calvin wants his son happy, not appearing happy, but BEING happy. He questions his own happiness as his son heals. And he discovers the healing process has ups and downs, there are set-backs and he begins to feel again, allowing himself to mourn his lost son and have empathy for the son who survived.

Beth is the picture perfect mother, she plays golf with the right people -even if she isn't in the mood- just so she appears the model person she wishes to be seen as. She attends dinner parties, chides her husband if he does anything that may show the Jarret's are anything but deliriously happy people -despite their tragedies.

There is no concealing her contempt for Conrad, her own son. She is angry at him for attempting suicide. My opinion is because she lost one son to fate and cannot understand why her other son would dare take even more from her. Conrad is not Buck and Buck was her pet favorite. Conrad should have let go of the boat, not Buck -this is never said, mind you, but is very apparent. She gets angry at him for doing things like quitting the swim team without telling her and well, from what I can tell, she almost seems to resent him healing.

Into this story enters a pretty girl, Jeannine. She is also suffering from the appearance situation and Conrad helps her with that by just being himself. Unlike the drooling, ass-grabbing buddies he knows, he treats her as a person and she begins to realize she is human and that is a good thing.

So much goes on and much of it is conveyed by actions rather than words. The icy treatment of Conrad by Beth cannot be described with proper justice -it's that masterful, the sweetness emoted by Calvin is genuine and Dr. Berger's raw approach to bring Conrad up into the world of the living again, is priceless, especially when dealing with setbacks like a former friend from Conrad's hospital killing herself and the very discovery of why Conrad is so angry at himself.

In the end, everyone makes discoveries and acceptances of who they are and where to go from here...

Ordinary People's title explains it all.

This is supposed to be the happy family in suburbia and between the accidental death and an attempted suicide, it is tainted.

These really are no Ordinary People, but the movie seems to be about how so they really want to be, although the message is, there is no such thing as Ordinary and life gives you plenty of twists and suprises to deal with.

Conrad's emmergence into the world as a better, more in touch with himself person is amazing, Calvin's emotional rebirth is also very well played.

The shallowness of some people is a bit of a turnoff and the callous way people treat Conrad like a walking timebomb is un-nerving, this is not a sit down and relax movie-it makes you think.

Jump To: Music & Soundtrack Vibes
Or use the menu to navigate
1980 Paramount Pictures
1999-2020 fast-rewind.com
V4_27 Powered by Rewind C21 CMS
Please Share The 8s
Support this spam free and non-commercial site
Copy
Thank you for sharing us!