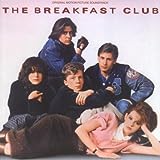 The soundtrack has a good cross section of pop music from the era and is readily available on CD.Update Us

Thanks to Ashley
The theme song, "Don't You (Forget About Me)", was written for the film by Keith Forsey. It was a number one hit for Simple Minds, and both Billy Idol and Bryan Ferry turned down offers to record it first (although in 2001, Billy Idol recorded Don't You (Forget About Me) as a bonus track for his Greatest Hits album).
Thanks to Becky Parsons
Although Simple Minds scored a massive hit with '(Don't You) Forget About Me' they were less than impressed about it as it was the only song they performed which they didn't actually write. Apparently, they weren't very keen on doing the song at all.

The Breakfast Club featured the following pieces of instrumental music:

Jump To: The Juicy Trivia!
Or use the menu to navigate
1985 Universal Studios
1999-2020 fast-rewind.com
V4_27 Powered by Rewind C21 CMS
Please Share The 8s
Support this spam free and non-commercial site
Copy
Thank you for sharing us!