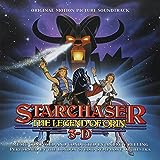 Starchaser: The Legend of Orin Soundtrack

Thanks to John Edward Kilduff
When "Eye Of The Tiger" was performed at the Academy Awards in 1983, Survivor didn't sing it. The song was instead peformed by legendary Motown group the Temptations and Sandahl Bergman, the actress that we all love and remember from "Conan The Barbarian" and "Stewardess School".

Andrew Belling's score throughout the film is orchestral and very theatrical (think Star Wars yet again), but not overly so because it works well, enhancing and adding to the mood of the scenes.Update Us

Jump To: The Juicy Trivia!
Or use the menu to select another option
1985 Steven Hahn
1999-2020 fast-rewind.com
V4_27 Powered by Rewind C21 CMS
Please Share The 8s
Support this spam free and non-commercial site
Copy
Thank you for sharing us!