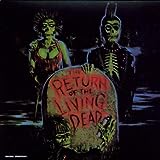 Return of the Living Dead Soundtrack

Return of the Living Dead featured the following songs:

This is a GREAT soundtrack for you Horror nuts. There is a lot of creep rock here, *** Now re-released *** Use our search device to order a copy NOW!Update Us

Thanks to Ty W. Norris
The cult/punk band "The Cramps" wrote and performed the track "The Surfing Dead", which adds to the impressive resume of this classic.
Thanks to Montgomery Brando
There were 4 horror punk songs recorded for the soundtrack that were never used. They were done by a band called The Undead and all music / lyrics were written by The Undead's singer / songwriter Sid Terror. The songs were "The Undead Anthem" (for the reanimation scene in the graveyard), "My Girlfriend" (for Trash's graveyard striptease), "Everybody's Dead" (for various carnage scenes) and "Zombie Army" (for the end credits).
Thanks to Montgomery Brando
Tobe Hooper (Texas Chainsaw Massacre) was originally set to direct and when he was replaced, the producers tried to change the deals for all the bands, so that the producers would have all publishing rights to the songs and that the bands could not re-record them or perform them live. This is why The Cramps and The Damned never perform their songs that appeared on the soundtrack live. The Undead refused the new deal and their songs were pulled from the soundtrack, however the band released them as "THE UNDEAD: THE RETURN OF THE LIVING DEMOS - The ORIGINAL Original Soundtrack". The only band that has performed their song live is 45 GRAVE (the song "Partytime" replaced one song by The Undead), because the song had been previously released... However they rerecorded the soundtrack "Party Time" with different lyrics for this movie, which is how they retained the rights to the original.

Jump To: The Juicy Trivia!
Or use the menu to navigate
1985 Fox Films Ltd.
1999-2020 fast-rewind.com
V4_27 Powered by Rewind C21 CMS
Please Share The 8s
Support this spam free and non-commercial site
Copy
Thank you for sharing us!