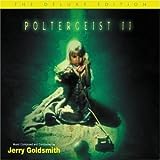 Poltergeist II: The Other Side Soundtrack

Poltergeist II: The Other Side featured the following pieces of instrumental music:

With the score for Poltergeist II Jerry Goldsmith approached the music from a totally different point of view than the first Poltergeist score. The original was fully orchestral with otherworldly choral passages at key moments and fiercely aggressive action music was a highlight. This sequel score is far richer and smoother in terms of orchestration. The chorus is more Omen-like in design with large quotes of God Is In His Holy Temple describing the forces of evil at work. But far more noticeable in this score is Goldsmiths use of electronics that lend the score a mystical and mysterious feel greatly adding to the more magical elements of the story.

Carol Annes Theme is again the main theme for the film. This time, however, a rousing and powerful Indian motif for French horns opens the score and is just as predominant. The aggressor is a wonderfully haunting theme for Kane.Update Us

Jump To: The Juicy Trivia!
Or use the menu to navigate
1986 MGM
1999-2020 fast-rewind.com
V4_27 Powered by Rewind C21 CMS
Please Share The 8s
Support this spam free and non-commercial site
Copy
Thank you for sharing us!