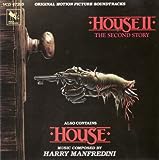 From its opening bars, we are drawn into a unique atmosphere for this installment. It features an approach to the harmony that really suggests the fantastical vision of the film.

Although it is getting rarer, the score can occassionally be found, it was released on the Varese Sarabande label, cat no. VCD 47295 combined with the wonderful score to House (the first story).Update Us

Jump To: The Juicy Trivia!
Or use the menu to navigate
1987 New World Pictures
1999-2020 fast-rewind.com
V4_27 Powered by Rewind C21 CMS
Please Share The 8s
Support this spam free and non-commercial site
Copy
Thank you for sharing us!