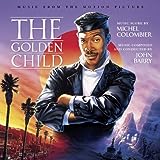 The soundtrack was originally available on CD on the Capitol Label and included the title song "Best Man In The World" by John Barry and performed by "Heart" lead singer Ann Wilson.

It is now out of print and is getting a little harder to find. Use our search feature.Update Us

The Golden Child featured the following pieces of instrumental music:

Jump To: The Juicy Trivia!
Or use the menu to navigate
1986 Paramount Pictures
1999-2020 fast-rewind.com
V4_27 Powered by Rewind C21 CMS
Please Share The 8s
Support this spam free and non-commercial site
Copy
Thank you for sharing us!