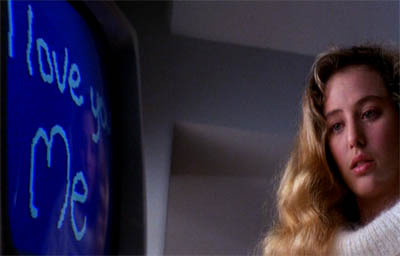 Thanks to Ven
The unit that the movie is about is the 25th Infantry Division (Light) based out of Schofield Barracks, Hawaii. The patch the soldiers wear is a taro leaf with a lightning bolt superimposed on it. This is from the unit's nickname "Tropic Lightning", due to our speed in deploying to far flung places.
Rewind Archive
With most of the characters based on reality and actual individuals, Willem Dafoe was chosen as the basis for Juan Angel Elias, a black haired White Mountain Apache* who befriended Stone.

Dafoe was perfect for the man... and after seeing "To Live And Die In LA", the director thought he was right for the role with his rugged features that presented a beauty emanating through ugliness.

"It is true that my father did in fact befriend Oliver Stone; His choice of Willem Dafoe was inspired!! He took on this role with everything that he had and I am proud and honored to say that he possesses one of the two remaining Dog Tags my father wore! it was my pleasure to see him wear it. I am sure that my father would have wanted it that way! That man just takes my breath away..."
Thanks to whiteraven48
We were very priviliged to have Anni Whiteraven Elias write to us herself to correct some information about her father, the real life Juan Angel Elias: "I am writing this letter to you to correct a mistake that you have on your page. Yes, it is true that my father had Black hair, green eyes and one hell of a temper to match! I take after him, as well. Please correct your facts, my father was full blooded 'White Mountain Apache'! He was not Hispanic!"

You can see more of Anni's information on this page and others. Thanks Anni!
Thanks to Jessica
Charlie Sheen was given the role of Chris Taylor when Stone saw something of himself in the young American, the son from a middle-class background who faced his own initiation whilst they shot on location in the Philippines. The role of Chris was also offered to Charlie Sheen's brother, Emilio Estevez.
Rewind Archive
The role of Chris was originally offered to Kyle MacLachlan, who declined.
Thanks to Nick
Actually according to E!, the role of Chris was originally offered to Keanu Reeves. As wierd as that sounds, its true.
Thanks to Jan
The leading role in Platoon was also offered to Charlie Sheen's father, Martin Sheen, but he declined it because the movie was taking too long to be filmed.
Thanks to Daniel Lewis
During the filming of the scene where Elias is finally gunned down by the Viet Cong, while the rest of the platoon watches from the choppers, not a single one of the special effects gunshot/blood packs on Willem Dafoe went off. Dafoe, unaware of this fact in the heat of the moment continued to writhe and act as if being riddled with bullets. After watching the out-take, Oliver Stone was so impressed by the forcefullness of Dafoe's acting that he decided to leave the scene just as it was instead of re-shooting with any of the special effects.
Thanks to Jeanie &Amp Jimmy
Johnny Depp's first real work, as he sees it, came with this movie, for which he spent "two weeks in the jungle in the Philippines. Just living there - in dirt holes. Despite a much-edited part (he played the translator), Depp began to think of himself as a professional actor. He had written actress Sherilyn Fenn's first name on the side of his helmet (at the time, they were engaged).
Thanks to Jeanie &Amp Jimmy
McGinley got his start after he was discovered by Oliver Stone's casting scout. The scout was sent to watch a production of Danny and the Deep Blue Sea, which was starring John Turturro at the time. The night they came, John Turturro had gotten a movie offer so, being his understudy, John took the stage and impressed the scouts enough for them to suggest to Oliver Stone that he had what he was looking for. Stone offered John a small role in one of the greatest war movies of all times, Platoon. The role he was offered was very small. But the actor John Spenser dropped out and John landed the fourth lead in the movie. After Platoon, he has worked with Oliver Stone four more times.
Thanks to whiteraven48
It is true that the role of Chris was offered to Keanu Reeves! Too bad he would have made a great Chris, but alas it was not to be.

The following missing scenes from Platoon are believed legit. If you disagree or have additional info, please update us.

Thanks to whiteraven48
Hi Sportsfans!! This is the daughter of the real Sgt: Elias. There is a deleted scene for Chris's talk with Elias at night after the fight in the village. Elias shows Chris a photo of his little girl. It makes that scene a total of 8 mins longer.

Aw, man.. We don't know of any alternate versions of "Platoon". If you know better, please add one for others to enjoy. It's quick & easy
Jump To: Filming Locations
Or use the menu to navigate
1986 MGM/UA Pictures
1999-2020 fast-rewind.com
V4_27 Powered by Rewind C21 CMS
Please Share The 8s
Support this spam free and non-commercial site
Copy
Thank you for sharing us!