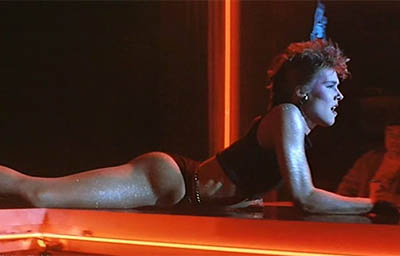 
The opening scenes of the spaceship crash and fire were filmed at Prentice Cooper State Forest and Wildlife Management Area, located between Chattanooga and Powell's Crossroads, TN. A small 2 acre lake, now named "Crater Lake" was built by Tennessee Forestry, adjacent to the crash scene location.

The scene where she drives in the wrong lane towards the van, lug wrench turns red; tree on fire is at Normandy Lake about 8 miles from where the Amaco gas station scene was filmed. That gas station was destroyed by a tornado that also hit my house about 3 miles away. All of this is in Coffee County near Manchester,Tenn. [Thanks to Big Mike]

Lynchburg, Tennessee (former Texaco gas station on courthouse square appears in one of the scenes). Being a "road" movie, many cities were used, but Lynchburg (home of Jack Daniel's) was one.

The motel scene was at the Holiday Inn located on highway 41 in Lookout Valley.

The scene where Jeff Bridges brings the shot deer to life outside the Bus Stop restaurant still stands, but slowly crumbles, along side I-24 near Kimball, Tennessee. It right next to a gas station/firework store at an exit just north of the Kimball/ Jasper exit where the big Tennessee Alabama fireworks store is, about 20 minutes from Chattanooga. [Thanks to Diamond Tim Pleshaw]

The scene where Starman is driving and runs the red light in front of a rapidly approaching tractor trailer was filmed at the intersection of Eady Road and US Highway 231 in Bell Buckle, Tennessee. The signal was a prop put up exclusively for the film. No signal exists there today.

Bowdark's Bus Stop location, where the deer on the car hood was bought back to life, was a firework's stand known by the real name of Clint's Fireworks, at the Martin Springs exit on I-24, west of Kimball, TN, and at the eastern base of Monteagle Mtn. UPDATE: Steve kindly wrote in to say that he thinks this may be the location of the old bus stop?

The scene where he sees the yellow light for the first time where she is driving in in the big (lol) town of Jasper, TN. At the time we only had one red light. its the main drag thru town and is passing the courthouse square.

Te big fiery truck crash was shot in Nashville on a stretch of Interstate that was not yet (i believe) open. [Thanks to Fairportfan] James May kindly wrote in to add: You are correct in the statement that the truck crash scene was filmed on a section of highway that was not completed at the time. It was shot at the intersection of I65 and Briley Parkway, just north of Nashville. At that point in time, Briley Parkway ended at the I65 interchange, and the crash was staged on a section that extended just beyond that intersection. The cliff that you see in the right of the scene just before impact was what we used to call "Helicopter Hill", and we took our jeeps up the face of it more than once. It has been cut well back, and Skyline Medical sits on top of a portion of what is left of that hill today. I remember the chopper, lights and all of the action going on... [Thanks to James May]

The cabin was in an area called Mullins Cove and the cabin was later bought and moved to a place in Kimball, TN by private individuals to keep for themselves.

The entire Jasper area was used for this movie a good deal. The fireworks store for the deer scene is at Martin Mprings exit, past Kimball, TN exit 152 and before you go up Monteagle mtn. There still is the real gas station that is seen in the background there and still operational today, however the bldg is gone but was once known as the grayhound bus stop station before you went up the mtn toward Nashville, TN [Thanks to Vicki Messer]

The location where Jenny and the Starman get off the boxcar train in Las Vegas is located west of downtown in an area known today as Symphony Park.

They go into one of the casinos on Fremont Street and hit a jackpot on the slots. They then buy their car at a dealership located at the corner of Fremont and Las Vegas Boulevard.

The roadblock put up on the interstate was located near Interstate 15 and US 93 (Exit 64) in Nevada, northeast of Las Vegas. They escape in the back of a pickup truck headed north on US 93, away from Las Vegas.

If you know of a good link for Starman locations, please let us know.

Jump To: Bungles & Goofs
Or use the menu to navigate
1984 Columbia TriStar
1999-2020 fast-rewind.com
V4_27 Powered by Rewind C21 CMS
Please Share The 8s
Support this spam free and non-commercial site
Copy
Thank you for sharing us!