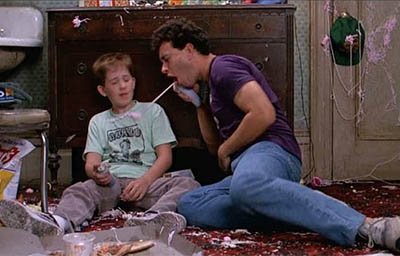 Rewind Archive
Wanna see the real life filming location used for The All Valley Under 18 Tournament in the movie?

These scenes were actually shot at The CSUN "Matadome" Stadium, located in Northridge, S. California. Google Map
The Hawaiian island of Oahu stood in for Okinawa.

Most of this movie was filmed in an area about 20 miles North of Honolulu called Kahaluu. It's a beautiful area. The village that stood in for "Okinawa" was a small area in Oahu on the North Shore that is not accessible to visitors but was rented from the owners and reconstructed for the movie. The entire movie was filmed on Oahu. [Thanks to Lisa]

Tour of the Filming Locations

We are pleased to be able to bring you a sneak peek at what LX locations will be available for The Karate Kid II upon release:

Please Note: The status of some entries in this preview may be wrong because they are in-progress or need updating before release.
Jump To: Bungles & Goofs
Or use the menu to navigate
1986 Columbia Tristar Pictures
1999-2020 fast-rewind.com
V4_27 Powered by Rewind C21 CMS
Please Share The 8s
Support this spam free and non-commercial site
Copy
Thank you for sharing us!