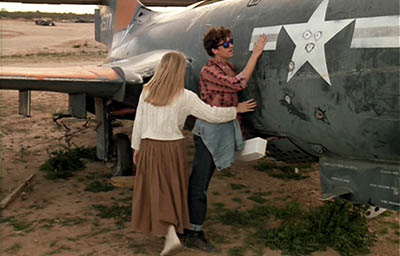 The airplane junkyard. One of my favourite scenes from this wonderful film.


Most of the college footage was shot at College of the Canyons in Valencia, CA (roughly 25 miles north of Hollywood in the Santa Clarita Valley). [Thanks to Trashy]

The locker room scenes were filmed in the boys locker rooms at Joseph LeConte JRHS, in Hollyood , CA. I believe they are on Bronson Ave, in Hollywood right next to the KTLA channel 5 news towera and studios, just south of where the Hollywood Christmas parade takes place every year. Also Carole Burnett went to this school in her days. I remember George Burn's trailer being parked outside of the school and all the movie crew equipment, they were blacking out the windows of the locker room and setting up to film. [Thanks to John Agayan]

If you know of a good link for 18 Again! locations, please let us know.

Jump To: Bungles & Goofs
Or use the menu to navigate
1988 New World Pictures
1999-2020 fast-rewind.com
V4_27 Powered by Rewind C21 CMS
Please Share The 8s
Support this spam free and non-commercial site
Copy
Thank you for sharing us!