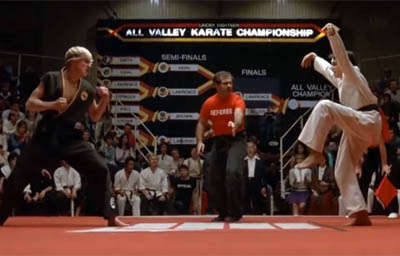 Unless you've been on a desert island, you'll already know that a spin-off series called "Cobra Kai" with the original Karate Kid, Ralph Macchio and his highschool nemesis Billy Zabka launched on YouTube Red in 2018, was an immediate runaway success and caused quite a stir. The second season debuted in 2019. After production of season three was completed, and YouTube decided to cancel the series, Netflix picked it up in June 2020. The third season released on Netflix on January 1, 2021 and a fourth season was announced. As of January 2021, Cobra Kai has been watched by 73 million Netflix member households between the three seasons.

More Trivia from The Karate Kid

Karate Kid is one of the greatest unexpected movie hits of the 80's. On paper, the idea looks cliched and weak, but this is a case of the actors and filmmakers making movie magic against all the odds.

Former 'Rocky' director John G. Avildsen directed the Karate Kid on a tiny budget from an inspired story and script written by Robert Mark Kamen, who had previously made his debut with the military academy drama, Taps. The story, as I'm sure everyone knows, is of bullied teenager Daniel, played by Ralph Macchio overcoming his tormentors and becoming a man under the guidance of the wise, compassionate Okinawan Karate master Mr Miyagi, played to perfection by former stand-up comic Pat Morita. The main reasons that the movie is better than you'd expect is the brilliant script and superb acting by all concerned. This is one of the movies where you just could not imagine any other actors playing the lead roles.

*Tons more info on every aspect of this classic movie is available at our own award winning Karate Kid Site on the links page.

Truly a suprise, but a worthy, cult 80's movie.

Great characters and strong underdog wins against all odds story.

Maybe a little too sentimental for a cynic's taste. Other than that.. nothing.

Jump To: Music & Soundtrack Vibes
Or use the menu to navigate
1984 Columbia Pictures
1999-2020 fast-rewind.com
V4_27 Powered by Rewind C21 CMS
Please Share The 8s
Support this spam free and non-commercial site
Copy
Thank you for sharing us!