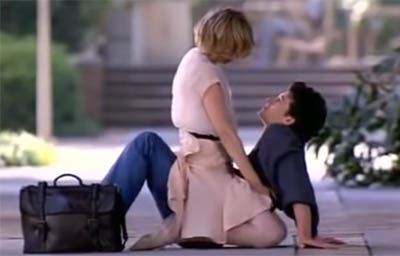 Rewind Archive
A quick and efficient schedule saw filming take place in LA from 15th March to the 4th May 1988.

More Making Of Happy Together

When Chris (played by Patrick Dempsey) goes to study script writing at the college of fine arts in Los Angeles, he never expected that his room-mate would turn out to be the flamboyant, eccentric and luscious female acting student -Alex (played with style by Helen Slater).

Despite the fact that they are exact opposites and clash early on, their relationship quickly moves from platonic to full-on romance.

She helps to improve his heartless mechanical writing by injecting much needed passion into his life, while he provides much needed stability in hers.

"Happy Together" is basically a 'character movie' and a comedy about the two main characters. What makes it especially interesting is the fact that we, the audience, care about these people. They have lots of lovable eccentricity and a special chemistry. This is not an action movie. This more like a stage play on film. There is no plot to speak of... In a similar fashion to "About last Night" we just follow their life and the ups and downs in their relationship.

I've seen some pretty un-flattering comments about this movie on the net, but if you are a Generation X student of 80's movie culture, you can take it from me -- it's more than OK...

Chris and Alex are surrounded by a cast of funny, believable and interesting 'characters' that help them to keep the tone light and funny.

Music is used sparingly but definitely in the classic 80's style and yes, you'll be pleased to know that we have musical montaging here too.

You can watch the whole movie on YouTube for free. You won't regret it...

This is a good film with a great heart, some fine acting and at times, real movie magic. Definitely one of the top 20 'must see' teen 80's romantic comedies.

Not for the cynical or 'adrenaline junkies'!

Jump To: Music & Soundtrack Vibes
Or use the menu to navigate
1989 Touchstone Pictures
1999-2020 fast-rewind.com
V4_27 Powered by Rewind C21 CMS
Please Share The 8s
Support this spam free and non-commercial site
Copy
Thank you for sharing us!