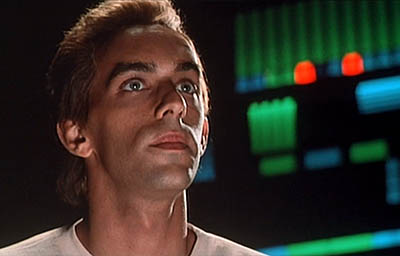 As a trained stage actor, he always had himself in mind for the character.

With the introduction of the microprocessor by Intel (the 4004, later 4040) in the 70s and the rapid advancement of them leading to the ever higher performance and lower cost journey that continues to this day, by the late 70s and early 80s, ordinary people were increasingly being exposed to technology that exhibited some apparent 'intelligence' that for many at the time was like witnessing some kind of sorcery.

Speaking of which, I've often wondered how a time travelling Marty McFly from the 80s would respond to a contemporary wielding an iPhone. Given a demonstration of its voice controlled power to communicate instantly with anyone worldwide with crystal clear video and sound as well as displaying your position on earth etc, not to mention access to the sum total of mans knowledge instantly and effortlessly; it would have seemed nothing less than the magic mirror as seen in Disney's Beauty & The Beast just a few years later.

Given this march of technology, mainstream science fiction was having a ball extrapolating and predicting how the future might be.

One area ripe for obvious picking was the old favourite: the development of artificial machines that mimic people... Androids.

Aside from the many books and short stories that tackled this subject, from the beginning in 1927 with Fritz Lang's hugely influential "Metropolis", motion pictures were the obvious choice to bring the new beings to life. Memorable examples from the 70s include "Silent Running" (1972) and, of course, Star Wars (1977). Both of these depicted the 'droids clearly as machines but as technology forged ahead it had become plausible that the machines might be virtually indistinguishable from real people, like in Michael Crichton's visionary "Westworld" (1973).

The problem with imitating real people is that the machine must behave cognitively in a plausible fashion, which indicates thought and reasoning... But what happens internally in such an artificial intelligence when the machine tries to deal with it's existence in sentient terms? It's a pretty crushing revelation to learn that you have been born into slavery both physically and psychologically with no way out. What about love and other empathic emotions? This leads to the central posit that dominates stories concerning AI to this day - Just because we can, doesn't mean that we should, or they might understandably not deal with it very well.

1982 saw at least two offerings that dealt intelligently with this central concept. "Blade Runner" which, of course, you know already and this movie, Android.

Blade Runner is, quite rightly, the towering inferno with its relatively modest $28 million budget leading to probably the greatest android genre movie ever made.

Android is the charming poor relation, made on a budget estimated to have been as incredibly low as $500k all in!

I'm not going to go into the story but suffice it to say that it deals with the same kind of issues as Blade Runner. Of course it's much simpler; nowhere near as richly textured and awesome, but as a study in what talented artists can do with no money, I believe for $500k you owe it to the filmmakers to perhaps just give it a view, particularly as the whole movie is on YouTube for free* anyway (*if you can put up with very poor quality unmatted full screen with visible mics etc not seen in the widescreen DVD).

For a start in decent quality it looks so much more than that paltry figure would suggest. Made by the masters of low budget cinema at New World Pictures, it beggars belief that the production designers had so little money to work with because they manage to portray a largely plausible space station of the year 2036, intelligently corporately branded throughout. Apart from a few period tell-tales like a portable TV set and 80s LCD watches, we see a world with draggable touch control panels (with 1982 'metro' interface!), plausible computer rooms and comms racks with what for all the world even look like Cat5 ethernet patch panels etc!

Most depictions of future technology from back then are a bit of an embarrassment when viewed today, but less so this one -despite the miniscule budget... But the production design had a secret weapon. A man who would display his talent time and again for intelligently depicting future tech, a certain Mr James Cameron ( "Titanic" / "Avatar" / "Terminator"), no less!

The script, while far from Shakespeare is thoughtful and the cast plays it sincerely, with admirable performances from Don Keith Opper, music artist Brie Howard and the always dependable Klaus Kinski doing his enigmatic thing that he always did so well.

This is one of those charming super low budget movies that almost miraculously manages not to be incredibly bad, mainly because it was clearly made by people who cared.

This is very far from the greatest movie ever made, but it's also a long, long way from the worst.

Just try and make a better sci-fi movie for the money. It asks the right questions.

Quite dour (but so is BR) and a bit slow

Jump To: Music & Soundtrack Vibes
Or use the menu to navigate
1982 New World Pictures
1999-2020 fast-rewind.com
V4_27 Powered by Rewind C21 CMS
Please Share The 8s
Support this spam free and non-commercial site
Copy
Thank you for sharing us!