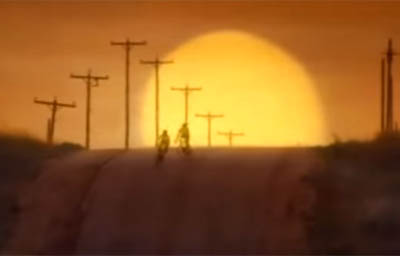 See Jennifer Grey before they were famous!

Thanks to Jim Luke
I was in the film as the kid at the end who looks on when David and Marcus are hugging!

A very pleasant, straight-down-the-road ride based around two brothers battling against a near hysterical mother, a potentially fatal inheritance (in the form of a cerebral aneurism), fraternal rivalry and a rather unpleasant rival called Larry 'cannibal' Muzzin.

Costner and Grant play brothers, the former being a successful doctor and the latter being in danger of failing exams. Costner is bitter with their mother (Janice Rule) who had a breakdown when their father died and wraps her sons in cotton wool because the condition that killed her husband is hereditary.

The brothers unite to take part in a gruelling bike race, 'The Hell Of The West' a multi-course ride over desert and through mountains. Along the way, Marcus Sommers (Kevin Costner) and David Sommers (David Marshall Grant) realise they have more in common than they previously thought.

Larry Muzzin (played with venom by Luca Bercovici) is one of the many obstacles in their way. Once a friend and team-mate of Marcus, he now bears a grudge against anyone who opposes him. There are laughs, excitement and heartbreak in this excellent film, which is one of my personal favourites.

Eight out of ten is my final score for what is one of my most watched videos.

Good acting and basically a great feel-good film. The finale is an edge-of-the-seater!

Quite a few cliche`s and also an alarming amount of endorsements. Some may find the film a little schmaltzy.

Jump To: Music & Soundtrack Vibes
Or use the menu to navigate
1985 Warner Bros.
1999-2020 fast-rewind.com
V4_27 Powered by Rewind C21 CMS
Please Share The 8s
Support this spam free and non-commercial site
Copy
Thank you for sharing us!